SPOILER ALERT! The plot of the movie will be discussed.

Ken Russell directed this 1980 film in his usual over-the-top style (The Devils, Tommy), this time with a story based on Paddy Chayefsky’s novel. The writer was at constant odds with Russell in the making of the movie, and he disowned his adaptation, unhappy with the way the director, who found the script ponderous, presented his words. A pseudonym is listed in the credits. Even with these qualifications, I find films such as this one, along with the recent Limitless and Lucy, which explore the possibilities of the human mind, fascinating. 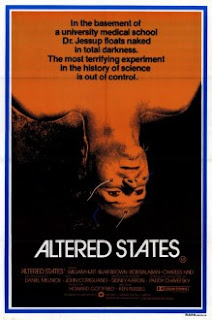 Toward the beginning of the story, Eddie Jessup (William Hurt) tells his future wife, Emily (Blair Brown), that as a youth he had religious visions of Christ and angels. Then, his father, whom he deeply loved, endured an extended, painful battle with cancer. His last word to his son was “terrible.” Eddie says to Emily, “So the end was terrible, even for the good people like my father. So the purpose of all our suffering was just more suffering.” After his death Eddie had no more visions and gave up on the external belief in God. The movie is about his quest, as a renowned scientist, to fill that religious void with studies into how universal truths exist inside the human mind. 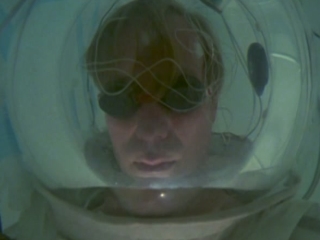 The story begins with Eddie in a sensory deprivation tank at a college where he teaches. He had students use the tank and decided to explore the experience himself. He tells his associate, Arthur (Bob Balaban), who monitors the experiment, that he hallucinated, seeing religious allegorical images, including, ominously, those from the bible’s “Revelation.” He also re-experienced his father’s death. Arthur says that Eddie cried, which is an unexpected response to Eddie. Thematically, the tank is a denial of the human body – one floats and is not using any of the physical senses. The person focuses only on mental processes. Eddie is so engrossed with his cerebral quest he is not able to emotionally connect with others in what we know as the real world. Thus, his surprise at the crying. He was only able to relate to someone else in his memories while in this solitary state. 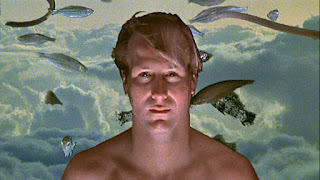 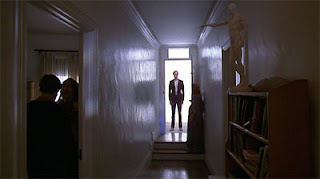 Eddie attends a party, (where people smoke pot and listen to The Doors which fits with the mind-expanding theme of the film), where he meets Emily, a psychiatric anthropologist, someone who explores the human psyche through history’s cultures. Her profession would seem a fitting match for Eddie, who seeks what links all human minds. When she first sees Eddie, he is in the doorway, framed by a bright light. Could this portend that he brings a revelation? Or, maybe it foretells that he is a man caught between two states of existence which exist on either side of that doorway. They have a scientific discussion and Eddie talks about how the madness of schizophrenics may not be a disease, but another state of consciousness. He also believes that schizophrenics seem to be trying to alter their physiology to match their schizophrenic selves. This metamorphosis of mind over matter comes up later in the story. Again, because he is looking for that religious substitute, he is interested in the fact that schizophrenics have religious visions, which to Eddie, may mean that they are tuned into something universal. Animals can’t describe their mental images and ethically he can’t implant electrodes into the minds of people to stimulate or records mental images, so he uses the deprivation tank as a non-invasive vehicle to study mental activity. 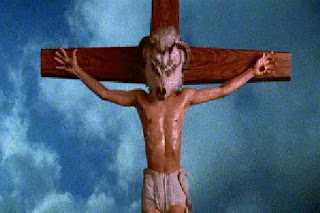 Emily finds him exciting, and they have sex after this first meeting. But, during the act, he is uninvolved personally with her. There is a stained glass window in the room and he stares at that, and he tells her he was thinking about God and crucifixions during intercourse. She tells Eddie that making love with him is similar to being harpooned by a mad monk in the act of receiving God. She later says “I sometimes wonder if I’m the one being made love to.” These remarks are significant in showing how detached Eddie is from other humans. In his quest for the universal he is like those sailors in Melville’s Moby Dick who, staring out into the seemingly infinite ocean, lose themselves, and plunge into the vastness. He tells her that he is not good with women, but that no one will be half as remarkable as her, and he doesn’t want to lose her. Given his lack of relating to others, she says that’s as close to his saying that he loves her that he will get. They do get married, have children, and he teaches at Harvard. But, we learn that they are to be separated. Eddie, again showing how his intellectual quest to learn about the human mind separates him from the rest of humanity, says to Arthur the ritual of everyday life, including the university politics, is driving him crazy and he wants to be free of human clutter. He says that he knows that Emily loves him, but the says, “whatever that means,” indicating he is not at home in the world of limited, every day existence. He can’t understand the importance of caring for others on a personal level. 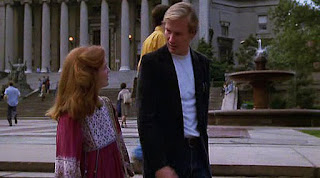 At a get-together, Eddie delivers his version for a replacement for the belief in a traditional God: “It is the Self, the individual Mind, that contains immortality and ultimate truth.” All of our individual minds sprang from and still have the memory of that first, original Self. He says that we all have “six billion years of memory in our minds.” For Eddie, “Memory is energy!” He believes that this memory energy resides in the limbic system of the brain and he seeks “a physiological pathway to our earlier consciousness.” He wishes to understand the essence of all humanity so as to explain, what he sees, going back to his father, the meaningless horror of life. While Emily goes to Africa with the children to pursue her studies during their separation, Eddie visits Mexico to join in an ancient Native American tribe’s ritual which supposedly can create the same archetypal response in all those who participate in a mushroom-induced experience as they reach a different consciousness. On the way to the ceremony, we see a cave, a primal symbol for the womb, but the camera looks from the inside of the opening, as if presenting a view down the birth canal. It could signify a rebirth into this other altered state. The Mexican native says that he will see “one’s unborn soul.” After Eddie takes the mushrooms, he sees fireworks flashing across the sky, as if neurons are firing in the mind. We hear the jarring sounds of horns that are not harmonious, and drum beating, which coincide with this unevolved, primal state. He sees civilized images of himself and Emily dressed up at a tea party, but there is a snake there, reminding us of the Garden of Eden, and she feeds him ice cream, a possible substitute for the apple. But, the apple represents knowledge of good and evil, and the human desire to want to know too much, which leads to destruction through pride. Perhaps Eddie is guilty of this most original of sins. 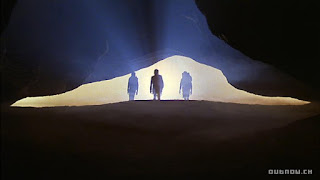 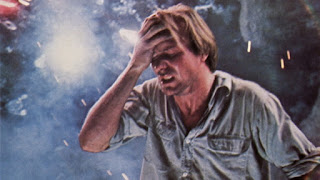 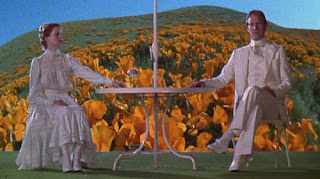 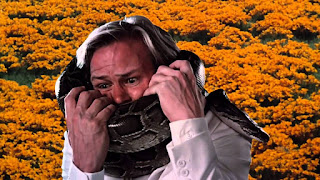 Eddie wants to continue the experiments back at Harvard, but hopes to use a sensory deprivation tank to enhance the experience. During one of his hallucinations he says he first observes, but then becomes, an early ancestor of humans hunting through grasslands. The virtual experience becomes reality, as he taps into that memory energy, like the schizophrenics of whom he hypothesized, and transforms his human vocal architecture into an almost simian one. He can’t speak for a while until he “reconstitutes.” He tries a session with no one monitoring him and he totally transforms into the primitive being, breaking into a zoo and killing and eating a small sheep. He calls this his most satisfying experience. It is ironic that an immensely intellectual man, who denies the finiteness of the body in a sensory deprivation tank to totally explore the infinite possibilities of the human mind, wants to become primordial the relief of escaping the futility of that endless scientific questing for ultimate answers. His final experiment unleashes the full force of the primal human memory energy, which bends pipes, blasts through glass, and lights up the entire laboratory, knocking out Arthur and Mason (Charles Haid), the doctor monitoring Eddie. Eddie’s mind-altering experiment turns him into an unformed being as he arrives at the state of the first cell of mankind’s origins. Emily rescues him, pulling him out of a whirlpool which symbolizes Eddie’s descent into this inhuman existence. 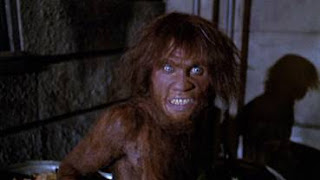 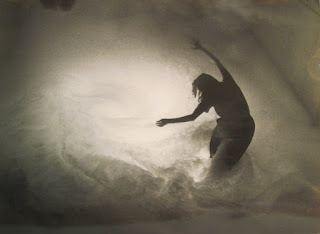 Emily tried to make him accept that we don’t have great truths, that we’re “born in doubt.” Eddie now realizes it is pointless to search for universal absolutes when there are only relative ones in the human world. He tells Emily that she saved him from “the pit.” He was at that “moment of terror that is the beginning of life,” which turns out to be “nothing. Simple hideous nothing. The final truth of all things is that there is no final Truth. Truth is what’s transitory. It’s human life that is real.” But, he tells Emily that he is too far gone into that realm of terror, and the only thing that stops him from being consumed is her. She tells him to fight the terror of that nothingness. She says we do that by building “fragile little structures to keep it out. We love, we raise families, we work, we make friends. We write poems.” 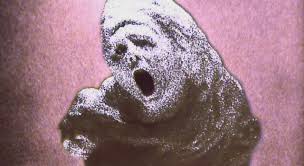 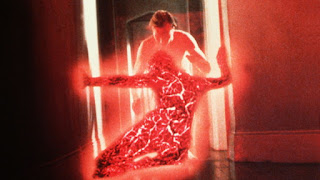 Eddie starts to transform into that horrible nothingness. When Emily reaches out to help him, she starts to degenerate, too. This image shows a symbolic spreading of this emptiness springing from meaninglessness. But, Eddie, because he now transcends his self-centered doomed quest and wants to dedicate his life to another human in the here and now, pounds against the walls and fights the abyss growing inside of him. He conquers it, and he transmits this new hope to Emily, curing her. It is fitting that the last words of the film are, “I love you, Emily.”

The next film is Harold and Maude.
Posted by Gus Cileone at 1:34 PM